The simple white door marked “The Pet Food Bank” doesn’t prepare you for the wonderland of stuff you find behind it. We’re not just talking doggie kibble. We’re talking half a warehouse chock full of every item imaginable to feed and to foster the wellbeing of man and beasts—dog, cat, horse, hamster, parrot, pig, you name it.

The Pet Food Bank delivers more than 2 million pounds of food each year to pet rescues in four states and Mexico. But that’s not all. Apart from the trash bags and the kitty litter and the piddle pads and the infinite other supplies it takes to keep animals safe and sanitary, the bank also delivers diapers and formula to battered women’s shelters, snacks to soldiers at Camp Pendleton, toothbrushes to kids on Skid Row, hospital beds to a local Alzheimer’s care facility—the list goes on.

A decade ago Renee Carleton started delivering food to pet rescues out of the trunk of her car. Now she is in the warehouse of The Pet Food Bank with her rescue dogs Vienna and Minx, both rescue dogs one of which was brutally abused by having her mouth wired closed.
How you can help: Email woof@thepetfoodbank.com or go to www.thepetfoodbank.com to make a donation or to volunteer.

In fact there’s not enough space on this page to describe the trove of goodies that comes out of the Huntington Beach warehouse.

Renee Carleton is the willowy blonde with a high-wattage smile at the center of it. She started delivering dog chow to one dog rescue from the trunk of her car. Then a funny thing happened.

She started seeing the depth of the need all around her, and through 16 years of pure volunteer effort at 40-50 hours a week, and through funneling thousands of dollars of her own money—”I don’t know how much, I don’t want to know how much”—has built The Pet Food Bank into what it is today.

But right now, she’s not focused on the stacks of goods towering above her. What bothers her—in fact what keeps her awake at night—is the vacant space in the back, a ballroom-sized stretch of concrete. It used to be covered in pet food donated by the Mars Company, maker of Pedigree and Nutro brands, which had been supplying the tons of food that’s been keeping 300 pet rescues afloat for years.

Then, last year, Carlton was notified that the company “had changed direction” and was now going to funnel the supply to a food bank in Texas. Carlton—a former branch manager for Citibank who left banking to start a salon in Newport Beach, only to have that business eclipsed by her passion for the food bank—has been bringing to bear all her professional experience and years of contacts to replace the supplier.

“I hate to say that, but I can’t sleep because I’m worried about the shelters and what they are going to do. The average rescue (group) goes through 4,000-6,000 pounds of food a month. It costs anywhere from $1,000 to $1,500. They can’t do it. Their money is spent on veterinary bills and basics like utilities.” Carleton nervously runs a hand through her hair. “It’s scary for me. We have never had to worry about food coming in. It’s the first time in 16 years we are not meeting the demand.”

To understand what that means to Carleton, you first have to get two things about her: One, what animals–especially dogs, especially sleek-coated Dobermans and Weimaraners–mean to her (everything). And, you have to appreciate the joy she feels when she can fill a need.

“Bringing a smile to someone’s face or alleviating someone’s burden, that is everything to me. I can’t describe the feeling when someone says, ‘We need an air conditioner’ and I can say, ‘We’ve got one.’ It fills my soul.”

“I think Renee feels about us the way we feel about our animals—she wants to make sure we are safe and cared for and have all that we need,” says Diane Monahan, director of Friends for Pets Foundation, the rescue Carleton first began supplying food to. Monahan jokes that she’s to blame for the fact that Carleton is still single—years ago Monahan gave her a rescue dog to foster, a Weimaraner named Joshua, who was so possessive he’d sit between Carleton and her date, growling whenever the would-be suitor made a move.

Raised in Westminster in a family of Midwesterners who’d come off the farm and didn’t believe in owning house pets, Carleton was well into adulthood when she saw a cheesy ’70s movie called The Doberman Gang. Something about the story of a trainer who trains her dogs to be bank robbers captured Carleton’s imagination, and she bought a purebred Doberman, Aja, that she wound up showing at dog shows. When Aja died, Carleton says a friend “dragged” her to the animal shelter to find another pet. That led her to her next canine love, Sparx, but more than that, opened her heart to the world of rescue animals.

“I’m not a person who can see something in need or hurt and walk away,” says Carleton, who early on realized that her experience in business was the best way she could help the cause. “I can’t work every day with the animals because it breaks my heart. I would be the kind to have 20 dogs and 10 million cats and a few horses too. I can’t do that emotionally. I took what skills I have and brought it here.”

Carleton gestures to the cavernous warehouse, where the beep-beep of a forklift punctures the air. The current stress of finding a pet food supplier has not stopped her from keeping her eye on the future. She takes her two rescue Dobermans for a run every day past an open field next to the warehouse. The land has just come on the market. In her mind it would be the perfect permanent home for The Pet Rescue Bank.

“My ultimate dream is that this goes on after I am long gone,” says Carleton. In a perfect world, there would be no need for what she does. “But I’m too realistic for that.” 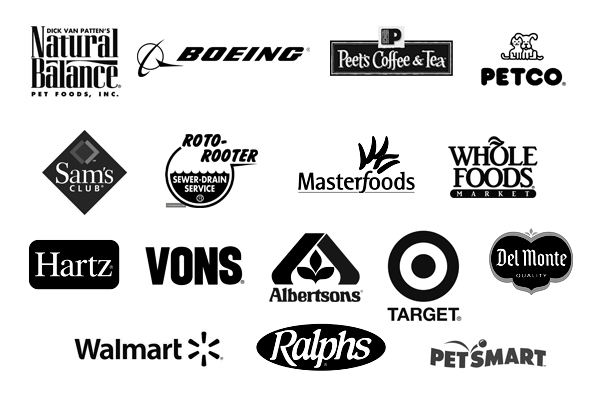